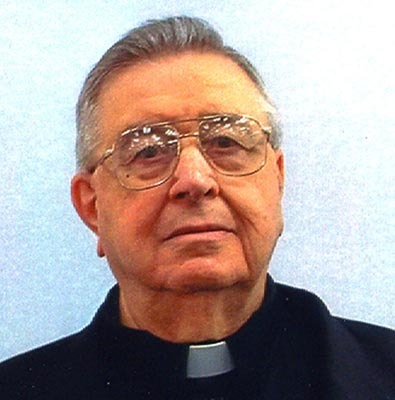 Please share a memory of Rev. Msgr. Joseph to include in a keepsake book for family and friends.
View Tribute Book

Ferrito, Reverend Monsignor Joseph L. age 90 at rest in Succasunna on September 2, 2021. He was born in April 25, 1931 in Paterson to the late John and the late Maria (nee Seminerio) Ferrito. Devoted brother of Emmanuel Ferrito of Wayne, George Ferrito of Wayne and the late Carmela Liguori, Josephine Robinson, and Gaetana Prumatico. Also survived by nieces, nephews, grand nieces and nephews and great-grand nieces and nephews. Monsignor Ferrito was a Roman Catholic Priest for the Diocese of Paterson. He attended St. Michael's Grammar School and St. John's High School, Paterson. He graduated from the Minor Seminary at Seton Hall University, South Orange, in 1948, then Immaculate Conception Major Seminary, Darlington in 1950. He received his degree in Classical Languages & Philosophy  from Seton Hall in 1952. He was ordained on May 26, 1956 at St. John's Cathedral, Paterson by Bishop James A. McNulty. Msgr. Ferrito was an Associate at St. Vincent Martyr Church, Madison (1956), Administrator at St. James Church, Montague (1961), Chaplain at St. Mary's Hospital, Passaic (1964), then Assistant Pastor at St. Michael's Church, Netcong, St. Therese Church, Paterson, and St. Mary's Church, Paterson (1964-1967). He was then appointed Pastor at St. Michael's Church, Paterson (1967), followed by St. Vincent de Paul Church, Stirling (1971). He received his Masters of Divinity Degree in 1976.  In 1979, he was appointed Pastor of St. Pius X Church, Montville. In 1993, he received "Prelate of Honor of His Holiness" with the title of Monsignor.  In 1996, he retired with continued ministry at St. Pius X Church, Forked River.  During his years as Monsignor, he served as a member of the Northeast Deanery, Paterson Diocese Priest Senate, and Priest Personnel Board.  Relatives and friends are invited to attend his concelebrated funeral mass at St. Pius X R.C. Church, 24 Changebridge Road, Montville, on Tuesday at 9:30 AM. Interment will follow at Holy Sepulchre Cemetery, Totowa. The reception of remains of Monsignor Ferrito will take place on Monday at 1:30 PM at St. Pius X Church, Montville, and his visitation will continue from 2:00- 7:00 PM at the church, with evening prayer taking place at 6:00 PM. In lieu of flowers, donations to the Salesian Sisters, 659 Belmont Avenue, North Haledon, NJ 07508 would be appreciated. Arrangements are by Festa Memorial Funeral Home, 111 Union Blvd., Totowa, NJ. For more information, go to www.festamemorial.com.

To send flowers to the family or plant a tree in memory of Rev. Msgr. Joseph Ferrito, please visit Tribute Store
Monday
6
September

Share Your Memory of
Rev. Msgr. Joseph
Upload Your Memory View All Memories
Be the first to upload a memory!
Share A Memory
Send Flowers
Plant a Tree