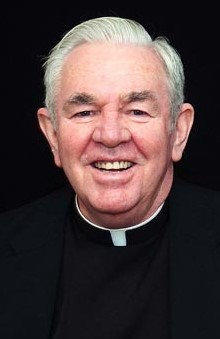 Boland, Rev. Msgr. Eugene M. was born on May 12, 1939, in the Village of Eyrecout, County Galway, Ireland, one of three sons of John and Nora (Potter) Boland. One of his brothers, the late Monsignor John V. Boland (2021) was the pastor of St. Francis de Sales Church in Vernon before retiring to Ireland. His other brother, Eamon, also predeceased him. Fr. Eugene is survived by his nieces and nephews, John, Noreen, Eamon, and Michael Boland. He is also survived by cousins in New Jersey. Young Eugene attended the local convent school until second grade, and then continued on at the local boy's school until he was thirteen. He began his secondary education (high school) at St. Joseph's College, Ballinasloe in 1952 and then went on to St. Patrick's Seminary in Carlow in the fall of 1957. He was ordained to the priesthood at the Cathedral in Carlow on June 8, 1963. Fr. Boland came to the United States on August 16, 1963 and was temporarily assigned to St. Vincent the Martyr Parish in Madison. On October 8th of that year, he was given a permanent assignment at St. George's Church, Paterson. On June 29, 1971, he was assigned as parochial vicar of St. James of the Marches Church, Totowa, where he remained ever since. In 1990 he was appointed Pastor of St. James Church and in 1993 was honored with the title of Monsignor. During his time at St. James alone, Monsignor Boland baptized 1,364 infants, witnessed 470 marriages, administered First Holy Eucharist to 2,864 children, attended 37 confirmations, and grieved with 1,249 families. He has made innumerable sick calls and communion visits. With over 37 years of service, he was involved with many activities in the Parish and the greater Totowa community as well. He has attended not only graduations, religious Education Classes and Rosary Altar Society meetings and events, but walked 37 May Crowning's, attended 37 swearing in ceremonies for the Totowa Borough Council, and countless Boy and Girl Scout and Knights of Columbus events. He was the Chaplain of the Totowa Fire Department and was the Dean of the Mid-Passaic Deanery for 10 years beginning in 1995. Visitation will be on Tuesday, July 20th from 2-7 PM at St. James of the Marches R.C. Church, Totowa, 400 Totowa Rd., Totowa, NJ with a prayer service to follow. A funeral mass will take place on Wednesday July 21st at 10:00 AM, also at the church. Burial to follow at Holy Sepulchre Cemetery, Totowa. In lieu of flowers, donations to St. James of the Marches R.C. Church, Totowa would be appreciated. Festa Memorial Funeral Home, 111 Union Blvd., Totowa is in charge of the arrangements.

To send flowers to the family or plant a tree in memory of Rev. Msgr. Eugene Boland, please visit Tribute Store
Tuesday
20
July

Share Your Memory of
Rev. Msgr. Eugene
Upload Your Memory View All Memories
Be the first to upload a memory!
Share A Memory
Send Flowers
Plant a Tree