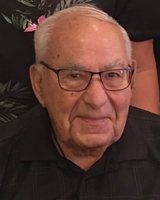 Portelli, Samuel age 95 of Holmdel at rest in Holmdel on April 2, 2021. Beloved husband of the late, Anne (nee Tinella) Portelli (2010). Loving father of Susan Salomon and her husband Garry of Bensalem, PA, John Portelli and his wife Eileen of Wall Twsp., William Portelli and his wife Susan of Los Altos, CA, and Roslyn Sharkey of Hazlet. Adoring grandfather of Laura McAvoy and her husband Jeff, Andrea Hodges and her husband Parker, Sam Portelli, Alexandra Salomon, Brett Portelli, Katherine Portelli, Robert Sharkey, Gabriella Portelli, Jacqueline Portelli, Marissa Sharkey, and Veronica Portelli. Doting great-grandfather of Juliet, Jack, and Fiona McAvoy and Samuel Hodges. Brother of Mary Portelli, Concetta Helble, and the late Joseph Portelli. Dear son of the late John and the late Rosalia (nee Govatto) Portelli. Born in Paterson, he lived in Paterson until 1993 before moving to Toms River until 2016 before settling in Holmdel. He was the Co-Owner with his late brother Joseph of Portelli Brothers Electrical Contractors, Paterson for 50 years before retiring in 1994. Samuel was a member of the Fidelians of America as well as the Elks Lodge. Services are private at the request of the family. A memorial mass for all to attend will be held at a later date.