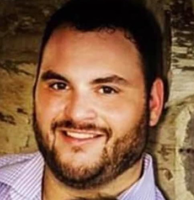 Adam Ryan Marin, 32, joined the Lord in Paradise on July 20, 2020. Adam was born in Houston to Kathy Krill Marin and Peter Marin on January 25,1988. He was the eldest of twin boys. Adam was an energetic and fun-loving person who took so much pride in his family. He enjoyed helping others and making people laugh. Adam graduated from Sam Houston State University with a Bachelor`s Degree in History. He returned to his Alma Mater, Alief Taylor High School, to teach the riveting subject of World Geography and coach football and baseball. Adam`s charisma in the classroom and on the field was like no other. He always encouraged those around him to better themselves every day. Adam finally met his match and married Kari Chovanec of Brenham, daughter of David and Lil Chovanec on December 19, 2015. In 2018, the second greatest thing happened and Adam became a father to a beautiful boy, Henry Alan Marin. Adam`s world was filled with more love than he could have ever imagined. He spent many hours working with Henry teaching him the ends and out of football, lacrosse, and how to throw a baseball. Adam always brought light, laughter, and love everywhere he went; his laughter was infectious and his stories unmatched. Adam is survived by Kari Marin (wife), Henry Marin (son), Kathy Krill Marin (Mother), Peter Marin (Father), Zach Marin (Brother), Katie Marin (Sister in law), Carson Marin (nephew), James and Maureen Baut (Godparents), Alyssa Noonan (Cousin), Jay Noonan (cousin) and family, Carter Noonan (Uncle), Glen Marin (Uncle) and family, Mindy Novick (Aunt), numerous friends and extended family. He is preceded in death by Nicholas Krill (Grandfather), Dorothy Krill (Grandmother), Murray Marin (Grandfather), Arline Marin (Grandmother), Nancy Noonan (Aunt), and John Krill (Uncle). A Mass will be held at St. Mary`s Help of Christians in New Jersey on August 8th, 2020 at 10am EST and will be livestreamed via Instagram on the Festa Memorial Instagram Account.