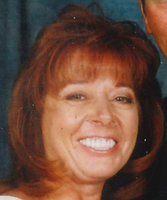 Rodgers, Marie D. "Re Re" (nee De Groot), age 66 of West Milford at rest in North Haledon on May 10, 2020. Beloved wife of Harry B. Rodgers of West Milford. Loving aunt of Melissa Cantinieri of North Haledon and David Cantinieri and his wife Taryn of Wyckoff. Dear great aunt of Giuliana, Isabella, Jack and Cole. Daughter of the late John and Diana (nee Scalzitti) De Groot. Sister of the late Carol Cantinieri (2008). Also surviving is her beloved pet dog, Harley. Born in Paterson, she lived in Paterson most of her life before moving to Hawthorne and then to North Haledon and then recently to West Milford. She was a Supervisor for the New Jersey Division of Motor Vehicles, Lodi for many years before retiring in 2009. She was also the owner and proprietor of Chocolates by Marie in Prospect Park for many years. Mrs. Rodgers was a parishioner of St. Paul's R.C. Church, Prospect Park. She enjoyed the Jersey shore, as well as trips to Atlantic City. She was a biker who owned a Harley Davidson, and she took trips to and visited Sturgis, South Dakota every year for the last ten years. She was a member of the Vietnam Veteran's Motorcycle Club. She also loved horror movies, sci-fi, mystery, and criminal justice shows. Marie was a devoted wife, aunt, cousin and friend to many and she cared for others more than herself. She enjoyed the holidays and made every family event feel special. She will be greatly missed. Out of respect and concern for public health and safety and the current mandate for social distancing, all funeral services will be private. The family has chosen to arrange a memorial at a later date. Festa Memorial funeral Home, 111 Union Blvd., Totowa is in charge of arrangements.