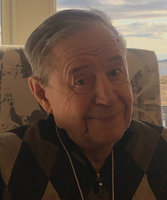 Belle, Robert M. "Bobby" age 91 of Pompton Plains, Pequannock Township at rest in Pompton Plains on March 18, 2020. Beloved husband of 71 years to Helen M. (nee Fierro) Belle of Pompton Plains. Loving father of Marie E. Bush and her longtime companion Vince Sodano of Cedar Grove and the late Barbara Schneider (2015). Dear grandfather of David Schneider, Daniel "JR" Schneider, Jason Schneider, Jesse Bush, John Bush and Christina De Vries. Great-grandfather of Taylor, Sam, Maria, Ava, Greta, Cassidy and Chloe. Also survived by many nieces and nephews. Born in Paterson, he lived in Paterson most of his life until 1980, then Clifton, then Lincoln Park, before moving to Pompton Plains. He was a Railroad Union Official for the United Transportation Union, Philadelphia, PA. Prior to that, he was a train engineer for Erie Lackawanna and Conrail. Mr. Belle cherished time spent with his family. He was a board member of the Erie Lackawanna Federal Credit Union. He was a lifetime member of the United Transportation Union. He used to raise roses. He was a semi pro bowler. He dabbled in photography. He built and installed cabinets and did home improvements as a hobby. He enjoyed computers, electronics, and trading stocks. Services will be held at a later date. Donations in his memory to St. Jude Children's Hospital, 501 St. Jude Place, Memphis, TN 38501 and/or the American Diabetes Association, PO BOX 11454, Alexandria, VA 22312 would be appreciated. For more information, go to www.festamemorial.com.