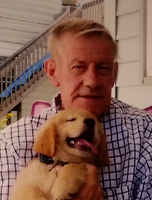 (Do not delete this line. It does not print. Text that is to appear on web must be entered after this line)« Hummel, Hendrik Herman age 73 of Haledon at rest in East Orange on November 5, 2019. Beloved husband of Christina Hummel. Loving father of Kara Wilson and her husband Shane, Jonathan Hummel and Patrick Hummel. Brother of Grace Westerhof and her husband Bill and the late Peter Hummel (2009). Brother in law of Sally Hummel. Dear son of the late Albert and the late Grace (nee Bakker) Hummel. Adoring grandfather of Julia Wilson and Thomas Wilson. He is also survived by nieces, nephews, and numerous cousins in the US, Canada, and the Netherlands. Born in Sauwerd, Netherlands he emigrated to the US with his family in 1957 where he resided in Pennsylvania for 6 years. After Pennsylvania, he lived in the Fair Lawn area for 7 years before moving to Haledon. He was a Carpenter for H&H Construction, Haledon, for 50 years before retiring in 2012. Mr. Hummel was a 4-year Navy veteran who served during the Vietnam War. He loved reading, horses, and his dog, Cisco. He was also a friend of Bill W. The family would like to thank the doctors, nurses, and staff of the East Orange VA Hospital for their exceptional care of Hank for the last four months. Relatives and friends are invited to attend the visitation at the Grace United Presbyterian Church, 981 Preakness Avenue, Wayne, on Friday from 11:00 AM to 1:00 PM with funeral services beginning at 1:00 PM. Interment to follow at Fair Lawn Cemetery, Fair Lawn. In lieu of flowers, donations to the American Red Cross, P.O. Box 37839, Boone, Iowa 50037-0839 would be appreciated. Festa Memorial Funeral Home 111 Union Blvd., Totowa is in charge of the funeral arrangements.