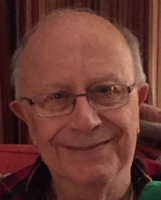 Fattell, Raymond J. age 88 of Totowa at rest in Totowa on September 24, 2018. Beloved husband of the late Florence (nee McMann) Fattell (2016). Loving father of Raymond W. Fattell and his wife Dianne of New York, NY and Jay R. Fattell and his wife Susan of Clifton. Dear grandfather of Rebecca S. Fattell and Alexander J. Fattell. Brother of the late George Fattell, Agnes Hermann and Julie Sorenson. Also survived by his favorite furry friend, Jax and several nieces and nephews. Raymond was born on June 4, 1930 in Paterson and lived most of his life in Totowa. He graduated from St. John's High School and attended Rutgers University for two years and then was called to active duty in November 1950. He served in the United States Air Force during the Korean Conflict. He was a Mortgage Banker for Bankers Mortgage Company, Clifton. After that he was an officer at Suburban Coastal and Vice President at Anchor Savings Bank. He was also employed at the FDIC, before retiring. He was married in 1955 to the love of his life, Florence Mc Mann, who preceded him. He was a member of the Passaic Valley Elks Lodge, the John Raad Post, the Passaic Valley Board of Education and a parishioner of St. James R.C. Church. He loved to bowl, travel to Europe and the Caribbean, and also toured the United States with his family. He played softball with the Elks for 10 years, and coached Little League in Totowa for 6 years. Relatives and friends are invited to attend a Funeral Mass on Saturday at St. James R.C. Church, Totowa at 9:30 AM. Entombment to follow at Holy Sepulchre Cemetery Mausoleum, Totowa. In lieu of flowers, donations to St. Jude's Children's Hospital, 501 St. Jude Place, Memphis, TN 38105 would be appreciated. For more information, go to www.festamemorial.com.